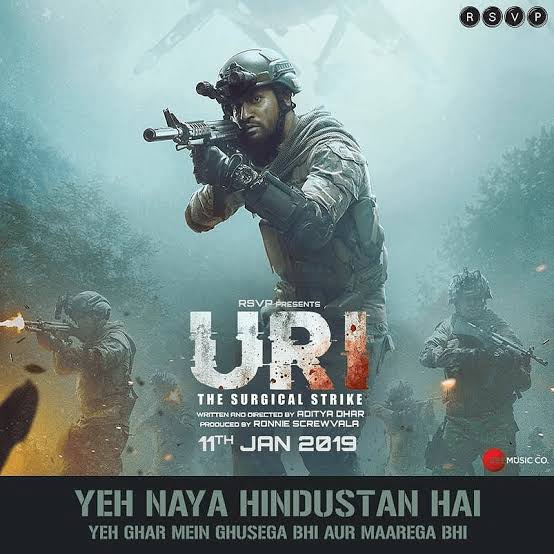 Vicky Kaushal, one of the most accomplished and talented actors in Bollywood, is known for his charisma, rawness, and simplicity, both on-screen and off-screen. He is the epitome of a drop-dead-gorgeous handsome Indian who will never stop you to drool over him. Sham Kaushal, the Bollywood stunt director, is his father. Vicky was no stranger to the obsession of the movie industry. He recently married Katrina Kaif, one of Bollywood’s beautiful divas. Vicky delivered one after another memorable performance, assuring that you couldn’t help but fall in love with him. He never fails to impress his fans with his acting skills, expressive eyes, and innocent cute smile. Vicky can pull off everything, from comedy to tragedy, with elegance and confidence. Vicky Kaushal, the heartthrob, shot to fame with his outstanding performance in ‘Masaan’ in 2015. His remarkable performances never failed to impress critics and audiences. With his flexibility and a wide variety of choices, Kaushal left no stone unturned in impressing his audience and critics. Kaushal is a promising and skillful actor, and the proof is that the directors even considered him to play a character with different shades.

Here is the list of 5 movies by Vicky Kaushal that you should binge-watch:

Masaan was a three-part episodic film with three major narratives that were eventually woven together, directed by Neeraj Ghaywan. The second story features Vicky. Deepak Kumar is a member of the Dom community, whose occupation is cremation. He is a civil engineering student at a polytechnic college. He meets and falls in love with Shaalu Gupta (Shweta Tripathi), a woman of a higher caste than him. They fall in love with each other. He tells her about his low rank, she claims that it doesn’t bother her. She promises to be there for him, even if her family objects, and she tells him to focus on his career. However, she was sadly killed in a bus accident and was carried to the same cremation ground as Deepak’s family. Deepak becomes disoriented after witnessing her body. He finally overcomes his sorrow after a long period of mourning and works hard to achieve his goals. In Allahabad, he got hired as a civil engineer. Here Vicky played a role of a Dalit boy dealing with the pain of his lost love and problems related to caste. His naiveness in the movie will make you glued to the film.

Director Anurag Kashyap’s film is based on the true story of Raman Raghav, a serial killer who terrorized Mumbai’s homeless living in the 1960s. it is an Indian psychological thriller film, which stars Vicky Kaushal and Nawazuddin Siddiqui in the lead roles. The thriller revolves around, a dishonest officer and a serial killer who become involved in a ruthless cat-and-mouse game. The director intelligently added a new twist by disclosing that the detective investigating the murder cases is also a psychopath. When ACP Raghavan Amrendra Singh Umbi (Vicky Kaushal) goes to collect his supplies, he finds the bodies of a man and his regular dealer. Ironically, he was assigned the case and learnedabout the serial killer. Ramanna (Nawzuddin Siddiqui), the alleged killer, is apprehended twice by the police. Ramanna has been keeping an eye on Raghavan, suspecting the cop of being a serial killer like him. That is proven when he kills his girlfriend in a fit of wrath. Ramanna strikes a bargain with him, promising to go to imprisonment for the murder of his lover if Raghvan agrees to murder the only witness to the crime. The movie is gritty as heck, and both Nawzuddin and Vicky outshine themselves in their performances.

Manmarziyan was directed by Anurag Kashyap. Rumi (Taapsee Pannu), and Vicky (Vicky Kaushal) are a lustful couple. Vicky played a role where he portrays a commitment-phobic and just doesn’t want to see them as a happily married couple. Rumi wants to settle down for the sake of love and understands one cannot survive on love alone. It is a love triangle between a spirited young woman, her outgoing boyfriend, and a fiancé who is a husband material played gracefully by Abhishek Bachhan. Vicky’s sorrow, pain, and almost drug-addict-like yearning for Rumi are all beautifully enacted by Vicky. Vicky Kaushal brought out his character’s natural craziness, who always believes in living the moment.

Raazi is an Indian spy thriller, directed by Meghna Gulzar. The film was adapted from Harinder Sikka’s novel Calling Sehmat which is also inspired by real-life events. The story was set in 1971 India-Pakistan war backdrop. Alia Bhatt plays Sehmat, a studious, brave, and talented Kashmiri girl who marries Iqbal Syed (Vicky Kaushal), a Pakistani army officer, at the insistence of her father Hidayat (Rajit Kapur), a double spy whose allegiance is with India. Though it was more of Alia’s film, Vicky Kaushal rose to the challenge as a gentleman who adores her with quiet dignity, even though the fact that she played an Indian spy in Pakistan. Even when he reports her infidelity, their love remains unwavering. When he discovered her dishonesty, his eyes spoke volumes, but he still loves her in his heart. The duo creates a great relationship with some chemistry, and you genuinely feel bad for him in the movie because of her duplicity.

Uri was directed by Aditya Dhar and the lead actor was Vicky Kaushal. The actor and the director won their first National Award for their extraordinary work in the film. The film starts with a surgical strike against North-East militants hidden in Myanmar by special force commandos headed by Major Vihaan Shergill (Vicky Kaushal). They carried out a heinous attack on an Indian Army infantry convoy in Manipur’s Chandel district a few days ago. Vihaan has decided to leave the army on humanitarian grounds because his mother was suffering from advanced Alzheimer’s disease. Instead, he was transferred to Delhi to work as a pen pusher so he may be closer to his mother. When Pakistan-based terrorists attack Uri, his brother-in-law Karan (Mohit Raina), a fellow army major, was killed. Vihaan, distressed, seeks authority to lead a counter-offensive across the border.Vicky Kaushal’s commitment is what makes you indulge deeply in the film. His famous dialogue from the film “How is the josh?” has invoked every person in the nation to shout out “High Sir”.