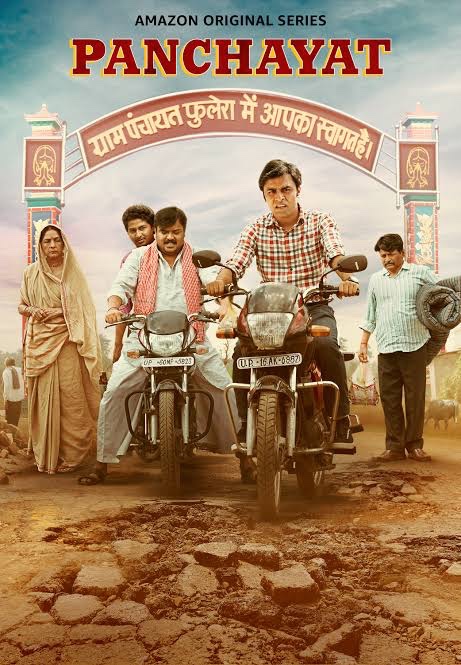 Sequels of successful series hardly live up to the expectations. A follow-up season 2 of a breakthrough series can never repeat the same magic on screen or the uniqueness that the show’s first season presents. Yet, TVF’s latest, the second season ‘Panchayat’ managed to pull off the vibe with ease:

There would be lots of chuckles if you are as emotionally immersed in the lives of the villagers as you were in Phulera in the first season. The first eight episodes of Panchayat followed Abhishek Tripathi, a newly graduated government officer sent to the village of Phulera in Uttar Pradesh. He is a newly appointed Panchayat Sachiv. The city youngster found it challenging to settle in the village due to the sudden shift in pace, power plays, and distinct social-economic realities. So he focused on clearing the CAT exam in order to migrate to Phulera. Pradhanji, his wife Manju Devi, the genuine pradhan, gramme Sevak Vikas, and up-pradhan Prahlad are among the people he meets along the journey.

All of the shows from the TVF mill are driven by relatability, simplicity, and emotion. Panchayat was the first to go above and beyond to expand the studio’s environment, and Amazon’s involvement further strengthened their resolve to do so. A man who believes he is an underachiever while the world around him has gone above and beyond to be a winner. Isn’t that something we’ve all experienced at some point in our lives? Abhishek Tripathi was shown to be a representation, and this is what drew the audience in.

For better or worse, Abhishek gets his head around the villagers’ lives and ends up settling with all of his other associates with time. The shift from the hostility towards the villagers in the first episode to forming a warm and heartfelt bond with the panchayat members in the last episode of season 1 leaves an indelible mark on the viewers’ minds.

Panchayats are also largely reliant on their surroundings. The village is nearly deserted. There is enough room for an equal number of people, yet there are just a few families. Abhishek lives in the Panchayat office, which is surrounded by bleak countryside and a rocky road. It’s almost as if his state of mind is in a void state. As a result, you can sense his absence every time the Panchayat office opens its doors.

Panchayat 2, the second season of the famous web series on Amazon Prime Video, has some of the best scenes with no action or story changes. This season, like the first, focuses on the small pursuits and difficulties of Phulera hamlet, with a dash of sarcasm, deadpan comedy, and strong performances. However, this season, like the previous, avoids delving too deeply into the more significant issues of rural India, such as caste, economic imbalance, corruption, and political bullying, instead of focusing on the interactions between its main characters.

The characters in this new season are now on a more profound introspective journey. We gain a deeper understanding of them and are obliged to accept them as they are. Comedy is now more situational, and writers are less likely to give life lessons in every scene. In a nutshell, the writing is excellent.

Other characters, particularly Prahlad and Vikas, have been given opportunities to grow without taking centre stage. Jitendra and Raghubir have a good understanding of the game and are no longer defensive. Nevertheless, they continue to put themselves in difficult positions and make their presence felt in practically every sequence.

The show’s brilliance resides in its simplicity and how well it ties to Abhishek’s life and personal issues. While he has gradually settled into his new profession, he still wants to earn significant money and live in the city. He has still not been out of that loop. So while he enjoys his job and the simplicity of life here, he gets upset when he learns that a friend works for a multinational in a big city and earns crores.

Meanwhile, the true village chief, Malti Devi, has gradually gained independence and begun to speak her views. She was more of a spectre chief in the first season, but in the new season, she is seen taking calculated actions, even though she leaves the day-to-day business to her husband Dubey (Yadav in top form)

Each episode is a delight to watch, full of situational comedy. The events are authentic, relevant, and humorous, ranging from a missing slipper case to assisting an intoxicated driver to resolving sanitary issues in the community. For real, this show is as relatable as it can get!

The appeal of ‘Panchayat 2’ rests in Chandan Kumar’s clever scripting and Deepak Kumar Mishra’s competent direction, which keeps the narrative light while philosophizing certain parts wonderfully. When Abhishek advises a local dancer to choose a different career, she responds that he, too, is a dancer in his profession, albeit to the melodies of others. Because of their low salaries, a drunk driver draws parallels withAbhishek, who is on the same level. Then one of Pradhan’s rivals accuses him of being sympathetic to Malti Devi and her family for being blind to their flaws. Several heart-warming and eye opening incidents are sprinkled throughout ‘Panchayat 2’ and its eight episodes, keeping the viewer captivated.

Bhushan, the local adversary, is reminiscent of Arturo from Money Heist; he is as annoying as a character can be. Bhushan and his wife try every trick in the book to go back to the Sachiv, as Pradhan and his wife. Every sequence between Bhushan and the Pradhan clan is a giggle riot for the audience, from snide remarks to amusing scrimmage.

Panchayat season 2 captures more essence of emotions than the previous seasons. Not gonnareveal much about the climax, but a little disclaimer before you settle back on your couch with this series on the weekend. Panchyat season 2 ending will leave you speechless and compel you to contemplate your entire life for hours. Even in the worst-case scenario, the realistic portrayal of friendship was my favourite takeaway.